Universal Studios Hollywood is "The Entertainment Capital of L.A." and the only movie and television-based theme park to offer guests the authenticity of a working movie studio, bringing the magic of Hollywood to life.

Harry Potter and the Forbidden Journey

Located at the heart of Hogwarts castle is the land’s signature ride, “Harry Potter and the Forbidden Journey.” Guests soar high above Hogwarts alongside Harry and Ron and partake in a number of the movie’s most memorable scenes that include a Quidditch match and narrowly escaping a dragon attack to experiencing close encounters with Dementors and the Whomping Willow.

“Despicable Me Minion Mayhem” is an original adventure that brings outrageous and heartfelt fun of the blockbuster movie to Universal Studios Hollywood as scores of Minions descend upon the entertainment destination.

Based on Universal Pictures and Illumination Entertainment’s Academy Award and Golden Globe Award-nominated film franchise and created in collaboration with Chris Meledandri, founder and CEO of Illumination Entertainment, the ride invites guests to embrace their inner Minion as they become immersed in an all-new story from the world of “Despicable Me.” Helmed by (former) super-villain Gru, with assistance from the slightly forgetful Dr. Nefario, “Despicable Me Minion Mayhem” captivates fans by recruiting and transforming them into beloved, gibberish-speaking Minions.

The Studio Tour is Universal Studios Hollywood signature attraction taking millions of guests behind the scenes of the world’s largest movie and television production studio.

From its humble beginnings 50 years ago, Universal Studios Hollywood has remained true to its roots of immersing guests in the awe-inspiring world of movie-making magic, providing remarkable access to movie sets on a real working studio lot.  Its once celebrated “Glamour Trams” have evolved to become the now world-famous Studio Tour and a hallmark attraction, bringing guests from around the globe onto areas of a working movie and television studio typically restricted to authorized personnel and into that elusive world motivated by three compelling words:  lights, camera, action.

Helmed by knowledgeable Studio Tour guides and accompanied by video host Jimmy Fallon, star of “The Tonight Show, the world-famous Studio Tour navigates an authentic production lot to experience a variety of exciting experience staged amid soundstages and sets.

This includes such exciting rides as “King Kong 360 3D” and “Fast & Furious—Supercharged.”

Revenge of the Mummy -- The Ride

The theme park's first-ever roller coaster, "Revenge of the Mummy—The Ride" is based on the phenomenally popular "Mummy" films.  A state-of-the-art roller coaster, the attraction taps into rider’s primal fears through immersion in a total multi-sensory environment.  Utilizing animatronics, sophisticated motion picture technology, state-of-the-art ride, audio and robotics engineering, the ride preys upon common human phobias:  fear of the dark, fear of insects, fear of speed, fear of heights and fear of death to deliver the world's first psychological thrill ride.

Transformed into the eerie-futuristic, mist-shrouded netherworld, "WaterWorld—A Live Sea War Spectacular" represents the most complex combination of high-tech special effects, pyrotechnics, flame and human stunt work ever attempted anywhere in the world.  The attraction puts studio guests in the middle of the exciting action that involves hundreds of stunts and fiery special effects.  Highlights include giant fireballs rising 50 feet in the air and cascading to earth in a spectacular wall of fire and a seaplane that swoops in directly above the audience, skidding across the water and coming to an explosive crash landing just inches away from startled spectators. 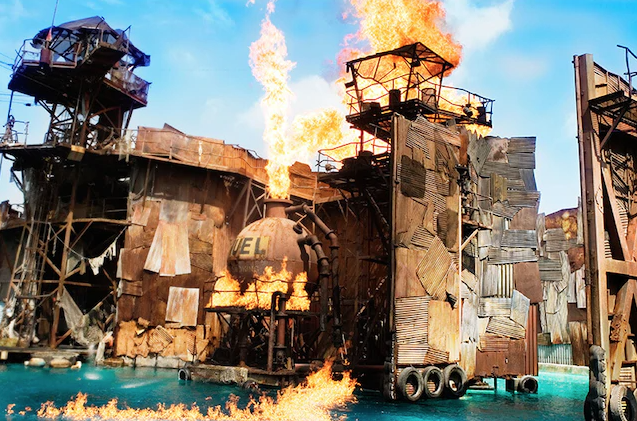 "Halloween Horror Nights" at Universal Studios Hollywood is Southern California's premier Halloween event that brings together the sickest minds in horror to immerse guests in a living, breathing, three-dimensional world of terror.

The whimsical spirit of the holidays transforms Universal Studios Hollywood into a winter wonderland bringing merriment and cheer to families and friends as the theme park ushers in seasonal favorites, “Christmas in The Wizarding World of Harry Potter” and “Grinchmas.”

An annual family tradition, “Christmas in The Wizarding World of Harry Potter” adds holiday warmth and cheer to this beloved land as the quaint town of Hogsmeade village is enchanted with seasonal décor uniquely themed to each of the individual storefronts and a dazzling light projection spectacular brings the iconic Hogwarts™ castle to life.

As night falls on Hogsmeade village, “The Magic of Christmas at Hogwarts™ Castle” illuminates Hogwarts™ School of Witchcraft and Wizardry with colorful imagery and impressive dimensional animations that dance across Hogwarts castle in tandem to a musical arrangement from the Harry Potter movies.  Musical performances from the a cappella Frog Choir, comprised of Hogwarts students and their giant throaty frogs, entertain guests with their harmonized holiday themed songs and fill the land with holiday cheer.

A topsy-turvy “Grinchmas” tree, twisting and turning over 55 feet in height and adorned with hundreds of ornaments and thousands of white and multi-colored LED choreographed to music, lights up the merry “Grinchmas” Who-lebration. Dazzling “Grinchmas” tree lighting ceremonies that take place every evening, accompanied by a snowfall flurry, bring this annual favorite to life, creating a festival of fun fit for The Grinch, his faithful dog Max and a roster of Who-ville Whos.

Be part of Hollywood’s biggest New Year’s Eve celebration at Universal Studios Hollywood’s EVE event. Fill your day with heart-pounding rides and attractions, then party the night with music, dancing and a special midnight countdown celebration with fireworks. 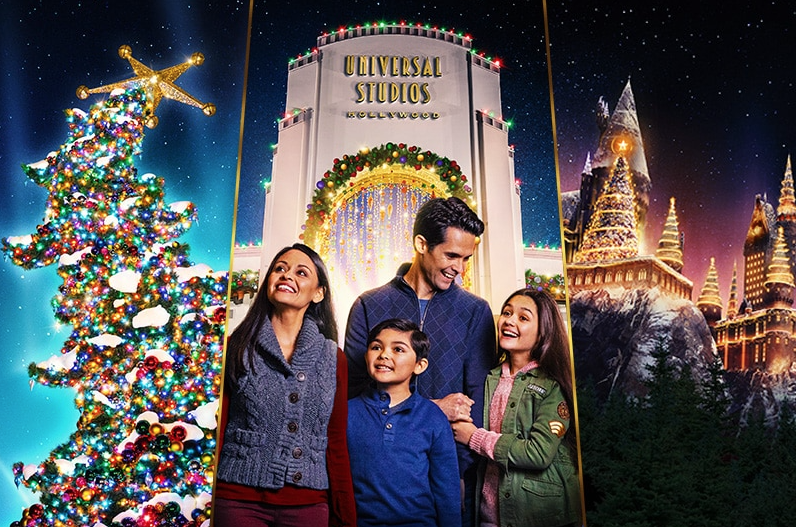 Craving Mexican food? If so, we have a new restaurant for you, Cocina Mexicana. Savor the Chicken Tinga Tacos, Wet Chicken Burrito, Taco Salad, Ground Beef Tacos and more while enjoying one of our three refreshing frozen margaritas: mango, strawberry or classic lime.

And don’t forget to save room for dessert because Cocina Mexicana also satisfies your sweet tooth with Tres Leches Cake, Buñuelos and more.

Step inside Springfield’s most recognizable pub and cozy up to the bar where you can enjoy a real Duff Beer, locally brewed exclusively for Universal Studios™. Take a selfie alongside the bar’s resident customer, Barney Gumble. Try a famous Flaming Moe or two and be sure to give the Love Tester machine a yank. You’re sure to fall in love with Moe’s Tavern where the jukebox is just as broken down as most of Moe’s regulars.

Dine on some of Hollywood’s best entrees including:

Also come back for a Freshly Made Funnel Cake with Strawberry & Ice Cream toppings!